The relevance of the linguistic movement and the Sardinian language. Interview with Davyth Hicks

Davyth Hicks is one of the founders and Secretary-General of ELEN (European Language Equality Network) NGO (Non Governmental Organization). ELEN represents 45 languages, with 166 member organisations in 24 countries, and has a consultative status within the European Parliament, Council of Europe, the UN and UNESCO.

He accepts to answer to our questions, and we hope it will be only the first act of a strong partnership.

Q: Davyth, you are ELEN Secretary-General. Before examining the major present issues you are facing, a general question: which is the relationship between language and freedom? If in a city or in a region the language of that place is not taught at school and it’s not used in the media, is that city or region free?

ELEN’s overarching objective is that we should be able to live our lives in our language in all sociolinguistic domains. This includes education and the media. If it’s normal for a Slovene to go to a Slovene-medium school in Slovenia why can’t a Breton go to a Breton medium school in Brittany? If it’s normal for Lithuanian to go to a state-sponsored Lithuanian medium school in Lithuania why can’t a Sardinian go to a state-sponsored Sardinian-medium school in Sardinia? Why, if Europe talks about equality and protecting linguistic diversity, is that not the case in a supposedly progressive 21st century Europe? Why are our languages treated so differently, why are they discriminated against, why are our children discriminated against when they want to speak or learn our languages, and why isn’t language equality normal? You ask if we’re free, but what do you mean by that? The majority of us so-called territorial language speakers are not able to live our lives in our language and face discrimination if we do try to use them, so they are not free in this respect. The situation is so bad that many of our languages are now defined as endangered.

Q: what is ELEN? Why was it born and now which are its major challenges?

ELEN is the international civil society organization for the protection and promotion of European territorial languages. ELEN was founded in 2012 by former member organisations of the European Bureau for Lesser used Languages (EBLUL) and several leading language activist organisations. We now have 166 member organizations representing 45 languages in 24 European states. It was founded so as to ensure there would be adequate representation at the international institutions, the EU and with states for European territorial languages. Language rights are human rights and we work to ensure that those rights are upheld.

Our major challenges are continuing systemic discrimination against our languages, the need to reverse the endangerment process, language recovery, and the lack of support from States and the EU to make those changes. All of this set against a background of a massive global loss of linguistic diversity and an entrenched monolingual mindset in many states.

Q: you have worked a lot in France in promoting the Molac law, which was eventually passed by the French legislator. Which are its contents?

The Molac Bill, passed by a huge majority (247 votes for, 76 votes against) in the National Assembly in April, made the following provisions for territorial languages:

Q: what happened afterwards? What did the Constitutional Court decide?

A small clique of Paris-based, jacobinist, LaREM (La République En Marche!) deputies centred around Minister Blanquer controversially ambushed the new legislation, despite it having huge cross-party support, by sending it to the Constitutional Court to check on the legislation’s constitutionality. The move has split the LaREM party and may prove to be a spectacular own goal engineered by Blanquer against his own party in the upcoming regional elections.

The Constitutional Court, itself made up of retired Parisian politicians, decided that:

We find this decision unacceptable. By this decision the Court appears to have put all immersion education under threat as well as stating that children cannot even use their language in school playgrounds or parents can’t name their children in their languages. While President Macron intervened in support we are now waiting on the report from the Castex Mission which will define what the legal situation is regarding the constitutionality of immersion education. We are also working with colleagues at the UN and Council of Europe on what international human rights treaties the Court decision contravenes in terms of freedom of expression, the rights of a child, minority rights and so on. Once we know that the legal position is confirmed we will be prepared to launch a campaign, if necessary, with the international institutions over any breach of human rights.

Q: you work in Brussel. Even reminding the Catalan recent history, which is your opinion regarding the EU stance towards the minorized languages?

The EU could do a lot better certainly, and it’s something that we continue to work on. The recent refusal to pass legislation after the success of an ECI for national and linguistic minorities was a low point, but it must be remembered that the EU has its hands tied by the rule that only member states are competent for their internal language policy. So if France wants to wipe out all of its territorial languages, which it has been doing, there is little that the EU can do about it. Part of our work is to try to get the EU to move its position. We have stated that if the EU can protect plants and fish why can’t it also protect European territorial languages – many of which are endangered. The EU works against discrimination on the grounds of race and gender, for example, but not on the grounds of language, yet it gives no good reason for that exclusion.

Q: what do you think of the Sardinian language?

I love it and I love to be in Sardinia. I like to hear it being used when I’m there, and we fully support it – even if I don’t understand it. I am interested to learn more about current levels of intergenerational transmission and current levels of provision of immersion education, media, and so on.

Q: how can we participate in Sardinia to the European linguistic movement that struggles for equality? How can we unite our energies?

ELEN is pushing for an Italian ratification of the ECRML as well as specific Sardinian language legislation that underpins future language recovery and normalization, so we warmly welcome all support from Sardinia. 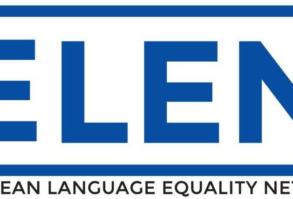